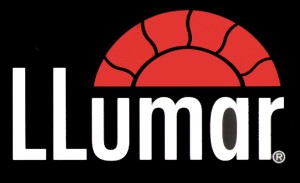 Always Cool Window Tinting located in Palm Bay, Florida has a wide variety of window tinting options for your Commercial, Residential and Automotive Needs. We primarily use LLumar Window Film at Always Cool Window Tint. Llumar is a micro thin film composed of polyester and metalized coating bonded by adhesives that is installed onto glass surfaces to provide significant solar protection. It screens out heat, blocks out 99{624c02ffe139149e5fa3fa181790442e5bd849b888cffea952f801bac8da5c33} of the sun’s damaging UV rays and deflects harsh, uncomfortable glare while allowing glare-controlled sunlight to pass through. It also adapts to the changes of the seasons, reflecting the hot sun in the summer, and with Low E films to reradiate heat in the winter, allowing you to be comfortable all year long

Below is a very general information guide. It is only meant to provide basic information. But, after reading it we do hope you have a clearer understanding of window tinting, in general. Please, call us at 321-728-7588 if you have any questions.

What Is Window Tinting?

Window tinting is window film that has been designed to protect your windows from heat caused by sunlight; as well as, IR and UV light. In order to do this, Dyes, metals, and micro-ceramics are layered between two layers of polyester film. The type, amount, and quality of the dyes, metals and ceramics used in the manufacturing process determine the quality and durability of the finished product; window tinting.

More simply, window tinting is two layers of polyester film bonded together, what is between those layers determines its different characteristics and qualities; like, shade, color, heat absorption, UV reflection, security, etc.

There are four basic types of window tinting; dyed, metalized,  hybrid and ceramic. Each is named after the primary component used to protect you and your car from over exposure to the sun. It can be a bit challenging to figure out which type of window tinting to use. There are a lot of benefits to using window tinting; glare reduction, heat protection, fade protection, U.V. protection, safety, aesthetics, privacy. You will want to prioritize which of these benefits is most important to you.

Window tinting is simply a layer of UV treated optical grade polyester film; that has been dyed to the desired shade or color, or has a layer of dyed film, or the dye has been applied to the adhesive. This type of window tinting relies on the absortive properties of the dye to keep your car cool. Because it does not contain any metal it gives your automobile the blackest look. This film is mainly used for its appearance. It has the least amount of heat reduction. However it will not interfere with radio signals. It does reduce glare, and reduces fading to interior upholstery.

Hybrid films use a combination of a dyed layer as well as a metalized layer. Hybrid window tinting the best of both worlds. A metal layer is used for its reflective qualities and a dyed layer is used for its absorptive qualities and to mitigate the shiny quality of the metal layer. Hybrid tinting films are generally considered to be a premium film. It is the film most often used when customers don’t specify what kind of tint they desire. This film is a good product for customers that desire crisp appearance, heat reduction, glare reduction, fade protection, and UV protection.

The fourth and final type of window tinting is ceramic. Absorb twice as much heat as dyed or hybrid films. It is considered to be the most technologically advanced type of window tinting. It is capable of high heat absorption yet still retaining a relatively light shading. It is definitely the ultimate in heat reduction. This film is good for customers desiring a highly durable material, with excellent clarity, and providing superior heat reduction versus other film choices. It should be noted that this heavier film may take up to weeks longer to dry out than other film choices.

How Does Window Tinting Work?

The suns energy that is transmitted through the window is what we perceive as light and what we feel as heat. The amount of light that is transmitter depends heavily on the type and composition of the tint used.

Dyed and ceramic window tinting rely more on absorption. Metallic based window tinting reflect more of the suns energy. Hybrid films, since they use both dyes and metal both absorb and reflect. The differences between types of window film can be subtle. Each type has its pros and cons. 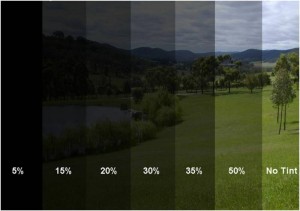 When looking through or at a tinted window the light that we see is known as VLT (visible light transmitted). VLT is measured in percentages. The percentages represent how much light you will see after it is  filtered by the tint. For instance, on the picture to the left are listed the VLT  {624c02ffe139149e5fa3fa181790442e5bd849b888cffea952f801bac8da5c33} for each strip of tinted window. Subtract that percent from one hundred and the remainder is the amount of visible light the tinting will remove.

VLT is not heat reduction. Nearly 50{624c02ffe139149e5fa3fa181790442e5bd849b888cffea952f801bac8da5c33} of heat is produced by nonvivsible light. Since VLT only represents visible light it is only a fraction of the energy that causes heat. It is only a component of the amount of heat a brand of window tinting may be able to absorb

The importance of VLT is that it is used to regulate car window tinting. Many states have laws that mandate a minimum amount of visible light must be transmitted through certain windows.

We hope you found the info here useful. This info was simply meant to give you a basic understanding of what you are thinking about buying. It was not meant to be detailed or scientific, just informative.

Llumar ATC – Premium Dyed Film. – Dyed plastic film that is very similar to the tint installed on vehicles from the factory.

Llumar CTX – Signal Enabling, Ceramic Film – Premium product. Boasts improved UV and IR protection than ATR does. Also, ceramic based films have shown through testing that they will not negatively affect the signal for wireless and cellular devices.

Llumar AIR Blue – Light enough to tint a windshield – AIR Blue is an advanced nano-ceramic technology film with a 78{624c02ffe139149e5fa3fa181790442e5bd849b888cffea952f801bac8da5c33} visible light transmittance that can dramatically reduce the cabin temperature of your automobile.

Must be presented at the time of service. Can not be combined with any other offer.